As commodities prices rise amid the Ukraine crisis, the U.S. planted soybean area would exceed corn planting for the second time in more than 15 years.

Wheat and oilseeds futures prices reached record highs in March both on Euronext and CME, while maize reached a near-record price, reported AMIS Market Monitor. Euronext wheat and maize futures surged to, respectively, USD 486 per tonne and USD 457 per tonne, while CME futures reached USD 501 per tonne for wheat, USD 314 per tonne for maize and USD 641 per tonne for soybean.

The basis premiums also remained high from the end of February until the middle of March. While futures prices initially reacted to the Ukraine crisis with a greater amplitude than physical prices, derivatives have gradually receded and converged back towards their underlying physical prices.

The U.S. Department of Agriculture (USDA), in its Prospective Plantings report, indicated that farmers intend to plant a record 90.96 million acres of soybeans 2022/23, up from 87.12 million last year. If this materializes, planted soybean area would exceed corn planting for the second time in more than 15 years, USDA reported.

Soybean prices have declined over the last couple of weeks on a better-than-expected Prospective Planting report issued by the National Agricultural Statistics Service (NASS). The 2021/22 season-average soybean price forecast is unchanged at $13.25 per bushel.

Major South American soybean-producing countries received much-needed rain during March. While this will benefit the second Paraguayan soybean crop, the first crop was severely damaged by the intense heat and drought. Moreover, crops in southern Brazil are reportedly past the flowering stage in below-average conditions.

The El Niño-Southern Oscillation (ENSO) is currently in the La Niña phase and is expected to remain as La Niña until at least June (80% chance) or July (65% chance), according to IRI/CPC. La Niña or ENSO-neutral conditions are equally likely after that. La Niña conditions typically increase the chances of below-average precipitation in parts of East Africa, Central and Southern Asia, southern South America, the southern United States, and northern Mexico. There are elevated risks of a two-year sequence of dry conditions in these regions, associated with La Niña conditions last year and this year. 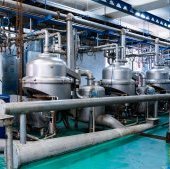